Cyprus is a member of the European Union and the Eurozone. A common law jurisdiction, Cyprus provides an established, stable and solid legislative framework.

Cypriot corporate law has evolved over time, from its origins as a replica of the English Companies Act of 1948 into a sophisticated corporate legal framework that encapsulates international commercial realities, while adhering to the principles of common law and equity.

Use of the Cyprus company is widespread in asset management, for intermediary or ultimate holding purposes, corporate finance and transactions.

The jurisdiction features on the ‘white list’ of the OECD and is committed to the highest standards of transparency.

Cyprus is considered one of the most tax-efficient jurisdictions in the European Union, for the following reasons:

There are no withholding taxes on dividend payments from Cyprus companies to persons not resident in Cyprus, irrespective of where they reside or whether a double tax treaty is in place with the jurisdiction of residence.

The NID is deductible against the company’s taxable profits that arise as a result of the newly introduced capital and cannot exceed 80% of the taxable profit as calculated before allowing for this deduction.

Dividends received into a Cyprus company are taxed at 17%, however, an exemption mechanism (satisfied in the majority of cases) results in zero taxation of incoming foreign dividends.

In instances where the transaction in relation to which a Cyprus holding company is used is purely intra-EU, the provisions of the Parent/Subsidiary Directive operate to effectively eliminate taxation on the transaction entirely.

Tax relief at a corporate group level is allowed for at least seventy-five per cent (75%) of the relevant group holdings and is applicable only on the results of the current financial year.

Losses incurred by a Cyprus company in relation to business carried on outside Cyprus can be deemed as deductible against taxable profits generated by that company in the current year.

Losses that cannot be utilised in the current year, are carried forward for a period of five (5) years, commencing from the end of the year to which the losses relate.

Interest income connected with the carrying on of a trade or business of the company is subject to the corporate tax rate of 12.5%.

Interest income not connected to the company’s business is exempt from corporate income tax and taxed separately at the Special Contribution for Defence rate.

Cyprus adheres fully to the OECD Transfer Pricing Guidelines on the application of the “arm’s length principle”, which represents the international consensus on the valuation, for income tax purposes, of cross-border transactions between associated enterprises.

As such, adequate interest rate profit margins must apply to intra-group financing transactions.  For holding companies with physical and economic substance in Cyprus, a simplified method applies.  In all other cases, intra-group financing would need to be supported by a transfer pricing study.

Investors can benefit from tailored rights through classes of shares as well as private shareholders agreements to regulate their affairs.

Private shareholder agreements can be concluded to regulate the relationship between shareholders in a Cyprus holding company and their respective rights.  Such shareholders agreements do not need to be disclosed to any authority or third party and can regulate a plethora of matters.

Cyprus, being a common law jurisdiction, affords legal certainty regarding shareholder relationships and the accountability of management.

This summary of the advantages of the Cyprus holding company illustrates how it is the optimal vehicle for use in corporate structuring and cross-border transactions, as well as for managing and holding assets and investments worldwide. 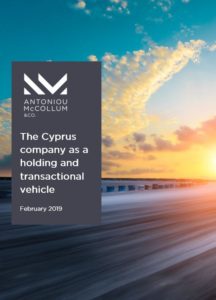 We use cookies on amc.law to give you the most relevant experience by remembering your preferences and repeat visits. By clicking “Accept”, you consent to the use of all cookies we use on amc.law.
Cookie settingsAccept
Manage consent